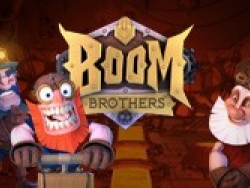 If you have a little sense of humor, you will be able to appreciate the intro of the videoslot Boom Brothers (you can skip it). Three funny brothers are miners by profession and have a valuable mine found. The diamonds are almost there for the taking, but are stuck between the boulders. A cargo of explosives does wonders ...

Boom Brothers is a richly animated slot machine with 5 reels, 3 rows and up to 20 win lines. Once you get to the big "Spin" button, the reels will spin and you play with the maximum number of lines. Of course you can only adjust your desired bet, but since you're still playing in the free play mode, that is perhaps the least interesting. The first unique game addition you will quickly notice when you do not get a winning combination, the chances are that you will get the "2nd Change" feature. One of the Boom Brothers will appear 3d animated and start throwing dynamite to change symbols, or another brother will ... well it shows itself.

Also nice is the achievement of the bonus game sequel (Feature game). Deep in the mine are the three brothers each in a cart on a track. There will be 3 under load carts appear where you as a player 1 may choose from. The content is first determined which brother will drive to the prizes. In addition to the bonus game, you may, of course, free spins, wild symbols and more expected.

Through all the fun elements of play and the way everything is animated, the video slot Boom Brothers you probably will not get bored even if you're playing in the free play mode. If you are considering to play even with real money, check it as well to the deployment height. You can easily customize namely the denomination (coin value) and thus already playing with a commitment from 20 cents.