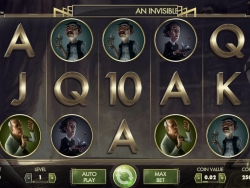 Casino games developer and software provider NetEnt has often collaborated with Universal Pictures and particularly in the development of new video slot games. These are actually all a great success and even the penultimate (Aliens), NetEnt has lovely won "gaming awards". 11 December 2014 brought the NetEnt video slot game The Invisible Man, and yes ... again a universal theme. The movie The Invisible Man is based on the eponymous book from 1897 and in 1933, Universal released the film. This is seen as one of the great horror films from the 30s.

We will not describe the whole story, after all, like many NetEnt slots you get after loading the game, only to see a brilliant intro video. This can off course skip right, but we recommend that you at least 1x watch from the intro, so you get the same in the atmosphere of the game. Once the video is finished, you will get an introduction to the main game features and there are a lot! Once the game itself comes into view, you might notice that the same dimensions are different than "normal". It is unfortunate that some concerns that we do not offer the full screen version in the free play mode, for it then you will notice that it is a widescreen video slot game in HD quality.

In terms of base you can count on 5 reels with three rows of symbols and 20 bet lines. However, you have to deal with "win both ways." Loosely translated it means "win back and forth" and it comes down so that combinations of winning symbols from both left to right and from right to left may fall on a bet line. This you have to deal with basically doubling the bet lines, without it costing you double your bet. Once you get winning combinations on the reels, the symbols will light up which caused the profit, so you can immediately see how and why you won.

The gameplay is simple to say, in practice play mode you will get 5,000 euros fictional play money in your balance so you can start immediately with the "Max Bet" or "Spin" button. Would you first adjust your bet to your liking? This is possible through the "coin value", whether or not in combination with the "level". In The Invisible Man is obviously primarily to the achievement of equal symbols on a line, all character symbols have a minimum of three equal need. But as I said, you can count on many extra game elements precisely because it is a great game to play with a real chance of high profits.

Free Spins - The game feature described above may also happen that both Wilds are active and when this is the case and the Police- and Griffin Wild symbol come together, you will receive 10 free spins. During the free rounds, you can expect all the roles wild symbols combination the re-spins. Also, you will get two yards in the picture: "Bonus Game" and "Police Spins". Both contain eight rooms, and can be filled by shifting a Griffin Police or symbol. Allows you to achieve one of two bonus games:

Bonus Game - You will be taken to three locations and at any location you can click on one of the five items to reveal prices. There are coin wins and earnings multipliers, let alone the police lie hat left, because this ends the bonus game.

Police Spins - You will receive three bonus spins with five wild symbols anywhere on the reels will end up.All in all, The Invisible Man video slot not bored by the unique game features. In addition, the graphic design i.c.m. 3D animations also be called great. And we're not even talking about the original movie clips with sound.