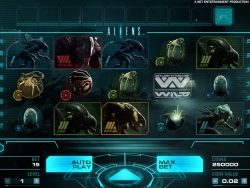 NetEnt Aliens The Video Slot is online! As the name suggests, the theme is based on the movie Aliens, or rather the multiple movies from 20th Century Fox. We are of course not talking about a rehash of the film, but a real collaboration between NetEnt and 20th Century Fox. It takes a while before the above game screen is loaded, but the wait will surely be rewarded. You can first expect an intro movie whose quality mention is sublime. In addition, the intro is also another longer than usual and it ensures that you will like all the atmosphere of the game. Put you certainly sound;-) Of course, the intro is also skip so you do not every time you want to play the game first need to look at the intro.

Once the videoslots are displayed, then you shall see that the design is quite different from the average videoslot. Off course, this is partly due to the theme with the aliens on the roll, but the whole frame is different. Normally all NetEnt slots look very similar with eg the green colored button at the bottom of Spin, etc. Despite the totally different design (which is very cool in our opinion), you obviously do not suddenly a difficult game to play for you. You can simply click on the blue colored triangle that you see below in the middle stand (or max bet) and the reels will start rotating. If you want to adjust the height of the deployment, adjust the level e / o "coin value" as required.

Regarding the videoslot game itself, you have to deal with 5 roll with 3 rows of symbols and only 15 win lines. It is not possible to play with less active win lines. This is the lowest possible bet 15 cents. The limited number of lines fact does not say that you did not win many possibilities. Many players have the idea that if you play on a video slot with a lot of lines such as 243 ways to win, you have a higher win opportunity. However, this does not apply to aliens! You will soon namely knowledge of the specific and unique gameplay elements. In terms of the basic course is that you x number of equal symbols on a line. But you will probably already be empty cubes / folders have seen the top of the game screen. These are highly significant as they can guide you through three levels. And the higher the level, the higher the prizes are!