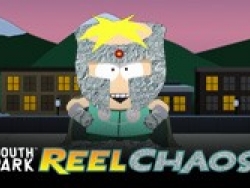 It's been announced a long time ago and in (late October 2014), it finally happened: NetEnt in collaboration with South Park Studios 2nd game developed "South Park Reel Chaos". As with the first video slot you can off course Kenny, Cartman, Stan and Kyle expect, with the same authentic voices and animations like in the series. Only in Reel Chaos think the characters they're super heroes that protect the city against "Professor Chaos". Whether that works ...? Thanks to the many mini and bonus features will need to succeed fixed and of course you can have yourself a nice amount of winning it. How about the first prize of 650,000 coins? (If you play with a credit value of 10 cents, this is still the nice amount of € 65.000, -).

Regarding the video slot game itself, you have to deal with 5 reel, 3 row symbols and 20 bet lines. You're always plays with 20 active lines, so it is not possible to activate less. This would, moreover, is also not desirable, since with less than the 20 lines will be much less likely to activate the features. Of course you like all NetEnt slots have the ability to adjust your bet as you wish, through the game level (level) and denomination (coin value). The lowest bet is 20 cents and the highest is 100 euros per spin. Above South Park Reel Chaos is naturally loaded in the practice play mode and even 5000 euro fictional play money. Adjust your bet is not such a big issue.

In terms of gameplay is the video slot game easy to call. Just click the Spin or Bet Max button and then start turning the rollers. It is there in terms of base you get x number of identical symbols on a bet line. The height of the price is of course dependent on the type of symbols which constitute the winning combination. (The South Park characters with the highest payouts). Certainly look at the payout table by means of the "i" button in the game screen. As mentioned earlier you can count on a lot of extra game elements:

All in all you can activate so many mini-games, with most arbitrary will be activated. Once this happens, you will notice that everything is animated in a great way in which the story is central. Even if you've seen everything already, you will not get bored and this is off course also because it can provide all the extras for good profits. Lots of fun to you!