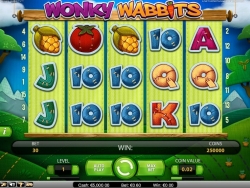 Not that known for playing but such a great videoslot, many of our visitors will probably already know. It is not for nothing that many online casinos choose to offer NetEnt games. Early 2014 NetEnt surprised us (and many others) again with stunning new 3D animated video slot Wonky Wabbits. The theme is dedicated to comic cuddly rabbits love carrots. Or actually they love more Wild symbols, as these have a very special function.

Wonky Wabbits (why not "rabbits"?) Is a video slot with the default number of 5 reels with 3 rows. The number of lines is also modest, with only 15. However, you do have to do with "Win Both Ways". This means that winning combinations both from left to right, as can fall versa. If you are not accustomed to this, it may take some getting used. Many video slot players look ie from left to right ...

The basis of the game is obviously getting identical symbols on an active payline. You're always playing with 15 paylines, you can only the coin value and bet level to adjust. A winning combination consists of at least three identical symbols. The roots are worth the most, then the tomato, corn, broccoli, eggplant. Ace, King, Queen, Jack and Ten symbols represent the "best" values.

You will notice that while playing the number Wilds appearing is quite modest. On the other hand ... if they appear too you'll find out soon enough that it is very appealing to get them. They can indeed mean a big role in the chance to win the grand prize of 390,000 coins. Do you play with a coin worth 2 cents, then this means a cash prize of € 7800, -. The maximum coin value is 50 cents, so the prize max may amount up to € 195.000, -.

Off course it's not just about the beautiful prizes, after all, if you're in the free practice play mode plays, it has no meaning. In that respect the gaming much more important and that's okay with Wonky Wabbits. The 3d animations will surely contribute to the Fun!